CSA awarded 2013 Range of the Year by NSSF SHOT Business 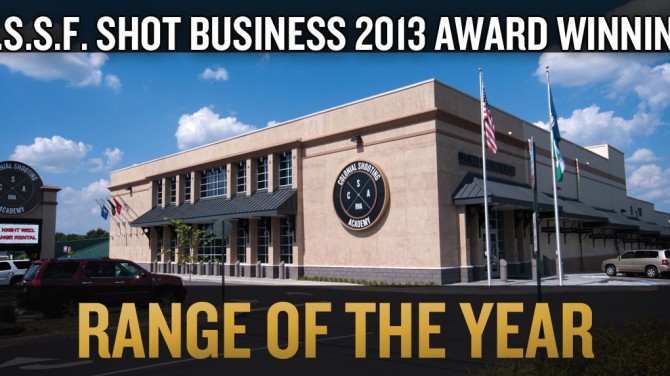 Colonial Shooting Academy (CSA), the largest indoor shooting range in the country open to the public has been awarded the National Shooting Sports Foundation (NSSF) Shot Business 2013 Range of the year.  This award was presented at the NSSF SHOT Show industry breakfast on January 14, 2014 in Las Vegas, Nevada.  The 2013 Range of the Year Award is given to America’s leading shooting facility based on community outreach and efforts to preserve and promote our hunting and shooting heritage and protect our firearms freedoms.  Four ranges were nominated from over 18,000 indoor firing ranges nationwide for this prestigious award.

During CSA’s first year of business they were distinguished as the first five-star rated shooting facility in Virginia, and one of only 25 nationwide.  The NSSF’s Five Star rating system is based on an evaluation of six criteria: appearance, customer/member focus, customer/member development, management, community relations, and amenities.

“We are tremendously honored and proud to receive the 2013 Range of the Year Award in our second year of business.  Formed by shooters, CSA continues to strive to lead the industry by example and to serve our community and abroad on the foundations of safety, education, and precision” stated Edward Coleman, General Manager.

Colonial Shooting Academy is the premier shooting range open to the public and the largest indoor shooting range in the country.  Our flagship facility is located in Richmond, Virginia with a second location opening in Virginia Beach, Virginia in spring 2014.  The 60,000 square foot facility offers a safe, friendly, one-of-a-kind, state-of-the-art shooting facility for all skill levels, from curious beginner to expert marksman.  Shooting enthusiasts from across the country and beyond travel to our flagship location to experience the high caliber services we offer.